Ex-servicemen being felicitated during the Ex-servicemen Interaction Meet 2014, organised by the Air Force Selection Board, Mysore, in the city on Sunday. Air Commodore O.P. Tiwari, Maj.Gen. Sudhir Vombatkere (Retd.) and M.N.Subramani, convener of the rally, are seen.— PHOTO: M.A. SRIRAM

The process of empanelling a few multi-specialty hospitals in the city for the Ex-servicemen Contributory Health Scheme (ECHS) would be finalised in a couple of months, said Air Commodore O.P. Tiwari, Air Officer Commanding, Air Force Selection Board (AFSB), here on Sunday.

This would enable the ex-servicemen in the region to avail themselves of quality medical services under the ECHS, he said. 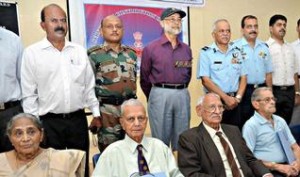 Ex-servicemen being felicitated during the Ex-servicemen Interaction Meet 2014, organised by the Air Force Selection Board, Mysore, in the city on Sunday. Air Commodore O.P. Tiwari, Maj.Gen. Sudhir Vombatkere (Retd.) and M.N.Subramani, convener of the rally, are seen.— PHOTO: M.A. SRIRAM

He was speaking at the Ex-servicemen Interaction Meet 2014 organised by the AFSB to redress the grievances of retired soldiers. “We are negotiating with the JSS Super Speciality Hospital and Narayana Hrudayalaya for the process of empanelling them for the ECHS and this may come through in two months’ time,” he said.

Maj. Gen. Sudhir Vombatkere (Retd.), who inaugurated the meet, said though the ECHS was launched in 2003 there has been a significant drop in the enrolment for availing benefits under the scheme due to the cumbersome process involved. However, it was retired soldiers’ right to avail themselves of the best medical services, he said.

Underlining the difficulties faced by ex-servicemen related to pension, Mr. Vombatkere said a majority retire early — in their 30s and early 40s.

“Some of them are known to marry after their retirement from the services (when in their 30s) but they fail to inform the records office of the change in marital status which leads to difficulties in disbursal of family pension in the event of death. Hence, any change in marital status and number of children should be brought to the record officer’s notice,” he said.

Faulty calculation of pensions by the pension disbursal banks concerned was another issue plaguing retired soldiers, but ex-servicemen were putting up with it and suffering in silence, he added.

M.N. Subramani, an ex-serviceman fighting the cause of retired soldiers through his organisation VeKare Ex-Servicemen Trust, which took the initiative for the rally and interaction meet, was presented a token of appreciation by Mr. Tiwari who promised that such meets would be conducted once in six months in future.

Three senior veterans — Group Captain C.R. Vardon, Wing Commander R.R. Mitra, Surgeon Captain H.R.N. Murthy, who was with the Indian Navy, and Lt. Sosamma Zachariah who was in the Military Nursing Service — were felicitated. In addition, Balamani whose son S.P.R. Sharath of MEG who achieved martyrdom during operation Rakshak in 2004, and Thangamma, wife of World War II veteran Machaiah, were felicitated.